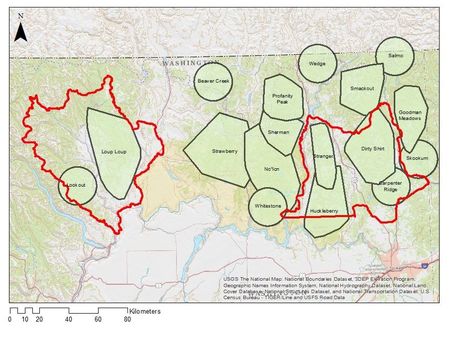 Wolf-Cougar Study Goal: In an effort to understand wolf  impacts on mule deer, white-tailed deer, and elk populations, it is critical to also consider the role of cougars, which are currently more widespread and more numerous than recolonizing wolf populations in eastern Washington. Thus, we seek to understand how wolf presence will impact cougar movement patterns and resulting predation on deer and elk.

​Methods: We are using GPS collars on wolves and cougars to determine if wolves are driving shifts in cougar spatial use. Data collected via GPS collars will also be used to better understand ecological interactions between wolves and cougars that co-occur across a large and dynamic landscape. For example, cougars may move to higher elevations in the presence of wolves. As a result, cougars may decrease predation on white-tailed deer, which reside at lower elevations, and increase predation on mule deer found in higher terrain. Second, we are visiting wolf and cougar GPS clusters (potential kill sites) to identify patterns in prey selection and kill site spatial distribution (e.g., along elevational gradients) to test whether cougar foraging behavior might change in the presence of wolves.  Finally, we are placing camera traps on cougar kills to study whether wolves or other scavengers are usurping cougar kills, which may in turn force cougars to spend more energy seeking additional prey.

The project encompasses six wolf packs in Washington (Okanogan – Lookout and Loup Loup; Northeast – Stranger, Dirty Shirt, Huckleberry, and Carpenter Ridge). The Okanogan study area is being investigated as a colonization front for wolves whereas the Northeast study area is studied as a wolf-saturated landscape with diminishing space for additional packs. Furthermore, the two study areas cover prey breadth as the Okanogan supports predominantly mule deer with smaller populations of white-tail deer, while the Northeast supports predominantly white-tailed deer and elk with smaller populations of mule deer.

GPS Collars: Cougars and wolves reside in both study areas, and GPS collaring efforts for both species commenced in 2016. Currently, 33 cougars have been collared across both study areas with 23 still alive and in the study areas. WDFW has collared wolves in four of six study packs.

GPS Clusters and Cameras: We are sampling wolf and cougar GPS clusters (potential killsites) in summer (June-August) and winter (December-March) to identify species, age, sex, and body condition of prey. Additionally, we are collecting habitat characteristics at these sites to understand whether and how cougar and wolf foraging patterns differ over a gradient of wolf and human use. When possible, we are placing camera traps on cougar kills to capture cougar-cougar, cougar-wolf, and cougar-bear interactions, along with any scavenging activity.

​Management and Ecological Significance: This study is unique in that it considers the effects of predator-predator competition on ungulate predation patterns by looking at wolf-cougar interactions. Predator-predator interactions are a critical missing link long-overlooked in predator-prey studies, despite having the potential to heavily influence outcomes for prey populations. Furthermore, our research is distinctive in that it is conducted across a patchwork of public and private land with diverse anthropogenic influences (agriculture, livestock production, timber harvest, recreation, urban development, wildlife management areas, etc.). Although wolf-cougar dynamics have been studied in other parts of western North America, providing a valuable set of baseline data, these studies have been conducted predominately on public and protected lands (e.g. Yellowstone National Park).  Thus, our research will provide information on wolf-cougar-deer dynamics in an area that is more representative of available habitat in western USA, where human landscape use and wildlife management goals must be considered concurrently.

Results of this study will specifically demonstrate how deer and elk predation in Washington State will be impacted by a growing wolf population. We will report differences in selection of prey age, sex, and species by wolves and cougars across a gradient of wolf saturation. We will highlight how changes in cougar spatial use, resulting from wolf recolonization, will alter predation pressure on deer and elk as wolf populations continue to increase. Furthermore, our work will demonstrate how co-occurrence of apex predators alters landscape use and foraging of both predators in a dynamic modern environment.