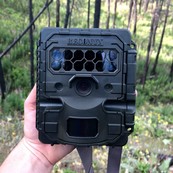 ​​Evaluating where, when, and why species overlap across different spatial and temporal extents is fundamental to understanding direct and indirect interactions between predators and prey.  Eastern Washington has diverse predator and prey populations including cougars, bears, wolves, white-tailed deer, mule deer, elk, moose, and a suite of mesocarnivores.

This research will specifically assess the distributions of different species in Eastern Washington, evaluate co-occurrence patterns among those species, and measure daily activity patterns of co-occurring species in an effort to better understand how predators and prey behave across space and time in relation to one another.  Results from this research could provide valuable information about when and where predator and prey are most likely to interact.​
​
We are deploying over 100 trail cameras across the Washington Predator-Prey Project study areas with the goal of photo-capturing ungulate and medium- to large-bodied predator species in Eastern Washington. University of Washington School of Environmental and Forest Sciences undergraduate students are hard at work classifying each camera trap image for the project. To date we have detected all focal species of interest as well as numerous other species. With these photo data, we will use occupancy models and other quantitative methods to estimate probabilities of species co-occurrence, daily activity patterns, and times-between-detections of co-occurring species.